I signed up for this race early in the year and as the date rolled around it looked like I was going to be off backpacking with Courtney that weekend. Then our schedule changed (because I got a new job!) and I became available. I wanted to get in another long run/race prior to the Waldo 100K in late August. Waldo is fairly hard and I want to make sure I’m ready.

This was a last minute trip and I didn’t do to much planning, so I had hoped to just find a place to camp, do the run, and then drive home. I was told that all of the camp grounds were full, but being a national forest, the “campground” appeared to be nothing more than a bunch of dirt roads that wondered off to various camp sites. I had no problem finding a place to roll out my bag.

At the start of the race we all took off down a gravel road. After about 300 yards the leaders stopped and the entire race pack bunched up. “Does anyone know which way to go?” yelled someone towards the front of the pack. Turns out we missed the very first left and the whole bunch of us turned around and ran nearly back to the start. It was a funny start to the day.

The race was two out and backs along the PCT. It used to run up to the Timberline Lodge, but due to trail restrictions it was shortened and the second out and back was added. Four of us that found our way to the front of the pack and quickly put in a small gap on the rest of the group. I was trying to stay comfortable and found myself drifting up and back from the other three guys as they tested each other out. I have no idea why, but I was letting go of a lot of water early so I figured I need to salt up a bit. Nothing salty at the first aid station, but at the second they had some S-caps so I stocked up. I was feeling relaxed, taking small snacks at each of the aid stations and taking a gel around every 20 to 30 minutes. The first out and back was generally rolling uphill with a downhill section at the end. At the first turn around (mile 14) we were all mostly together, but I got out quickly and decided to push it just a tiny bit to see how the other guys would react. They were still feeling competitive, so I backed off and let someone else take the lead again. On the way back to the start / finish however, (mile 28) two of the runners fell off.

At the start/finish I downed about 1/3 of a quart of cool chocolate milk, grabbed a whole banana and headed out for the second part. I never felt rushed at the aid stations but did a good job of getting what I needed and getting out. I got the whole banana down while running easy out of the aid station. I was feeling relaxed, it was hot but shady, and I just got in some good calories with no problems. Things were looking good for the next 22 miles. The next section was almost entirely uphill to the Red Wolf pass. The race website called this aid station mile 32, but the aid station folks and my split put it closer to mile 36. The first place runner and I were chatting on and off the whole way and I was really glad to have a running partner. From here you descend quickly through some over grown areas and are deposited on a gravel road. We stopped and looked around for a while and at first didn’t see any other ribbons. Then we saw two hanging on the right side of the road and guessed we should go that way. We didn’t see that the trail continued down the hill about 50’ down the road. We set off on the road and settled into a quick but comfortable pace. I didn’t see any other ribbons which was a bit nerve racking but my partner remembered hearing that there was a difficult gravel road section. The road was exposed and hot. It dead ended at a paved road which seemed right, but our split was a little long and there was no aid station. We stopped once again and then headed back, trying to conserve what we had left of our water. We passed about five other runners on the road, which reassured all of us that we had actually gone the correct direction. About a mile of climbin 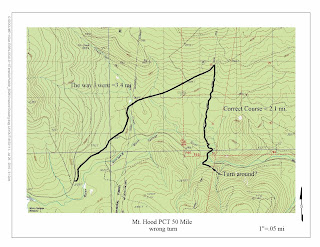 g away from the trail junction, my partner said he needed to walk for a bit. I was thirsty, but was still doing great and continued on up to the Red Wolf pass aid station. I drank a lot and set off for the last push back to the finish. I was excited that I was in the lead and enjoyed running fast down the hill. I had some cramping in my arms, which worried me a bit, but I knew it just from the lack of fluid not that I was slowly shutting down. I finished in 6:34 and it was by far the best I have ever felt for that distance. I felt like I really got everything right. I ran comfortably and took care of myself. The race director gave me a Nathan hydration pack for winning, which I’m really looking forward to trying out. Later, I discovered that we had in fact gone the wrong way, and the next day I discovered that I had been DQ’ed. That was a real disappointment, since I had a great run that might have even been a course record I wanted it to be documented. But that’s the rules and I got what I came for. This run has given me the confidence boost to try and run well at the Waldo in a few weeks. At work I did some mapping and figured our route had less hills, but was about 2.5 miles longer, in the sun, and with no aid. That made me feel better also, it’s never fun to discover you did well but cut it short. That’s two races now, No more getting lost!