On my third attempt to run this race, I finally made it to the starting line not only healthy, but fit. Waldo this year meant a lot to me for many different reasons. It’s a high caliber competitive race with prize money, two Western States spots, and a part of the Montrail Ultra Cup series. Also it’s local—co-directed by my good friend Craig Thornley—and is a beautiful and challenging course. Most importantly, Waldo would be a trial for me. After my 2008 Western States experience, I endured an incredible period of self-doubt, and I set Waldo up as a litmus test—an indicator of my ability to run well at longer distances.

Courtney and I stayed in a hotel down in Oakridge with Sunsweet teammate Meghan the night before the race. On race day, I think Courtney was more nervous than I was. For the most part, I was just looking forward to spending the entire day running on the awesome wilderness trails. Megan had recently given me Brian’s (her husband) headlamp to use for the first section that would be in the dark. Brian passed away in early August, and using his light at the start of this great adventure felt symbolic and reassuring.

The climb up the ski hill felt comfortable. I loved looking back down the hill and seeing all the bouncing lights slowly working their way up the hill, and into the day ahead. Around five of us were loosely grouped together as we filtered through the Gold Lake aid station. Courtney met me near the road crossing and took my light and extra clothing. Lewis Taylor and another runner gapped us, and I didn’t see them again until nearly the top of the Mt. Fuji.

Tim Olson summited first, and then was gone. The picture to the left is possibly the last clear sighting of Tim anyone got until the Mt. Ray aid station. Part way down I stated getting reports about Tim: “He is about 2 minutes up… He has about 3 minutes on you… That guy was flying – he has about 7 minutes on you!” Officially, he had put 4 minutes on me in a little under 7 miles. Ouch. Courtney met me at Mt. Ray and I had some banana. Lewis was right behind me. I decided to work a bit on the grind up to the Twins aid station to see if the gap was for real or just a crazy downhill effort by Tim. By the Twins aid station—theme: Heaven and Hell—Tim had put another minute on me, so he was obviously was not just a great downhiller. I backed off a bit and felt a little relieved I was free to run my own race.

At Charlton aid station I met Courtney again. She gave me some chocolate milk, a banana, my second 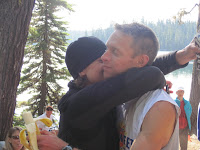 water bottle, and a hug. What else could I need? I was half way, feeling relaxed and in control. However, I knew that with the day warming up and the Twins & Maiden Climbs ahead, the hardest part of the course was still to come.

Shortly after the Charlton aid station I started to get some minor cramping in my calves. This slowed me down a bit, and I wasn’t able to take advantage of the downhill section into Road 4290 very well. I thought I had been taking enough salt and it was still fairly cool, so I figured I must be a dehydrated. I started drinking more, knowing I could refill both bottles soon at the 4290 aid station.

Out of the aid station, on my way to summit the Twins, the cramping wasn’t too bad because it was mostly flat and uphill. The Twins were work, but I felt like I kept the pace going well. Heading downhill to return to the Twins aid station I quickly realized that I hadn’t fixed the cramping and that is was now a big problem. I needed salt, and lots of it. I had been eating a little food at the aid stations and taking gels regularly which seem to be enough to keep my energy up, and my legs still felt good. Because of the cramping however, I felt like I really lost out on some good quick running down from the Twins to the Maiden Peak aid station. I had used up the last of my S! caps when I got to the aid station and they were able to give me four more, but only after some negotiation with the aid station captain.

The climb up Maiden peak was hard. I was able to keep a good hike/jog pace going for part way but as I got closer to the summit, I was really struggling just to hike. Eventually the trees started to thin, and I knew I was almost there. I was really looking forward to the short out and back near the summit. Maybe, just maybe, I would catch a glimpse of Tim (I didn’t) and I would get a chance to find out who might be behind me. No Tim, and no one within 9 minutes behind me. It would have been nice to see Tim, but this was once again my ticket to just run my own pace. I was feeling good again. I didn’t think it was possible for anyone to catch me, and I didn’t have to kill myself trying to win.

At the Maiden Lake aid station I received a nice face wash from the volunteers and a one man pep rally from Ed Wilson. I still had some cramping on the way down, but after some extra S! Caps at the aid station I was ready to go. All things considered, including the the previous 54.5 miles, I felt fantastic on the last section. As I got closer, I realized I was not only going to break 10 hours but I would be way under. It was possible for me to be competitive at these longer distances and I could prevent myself from falling apart at the end.

I had passed my Waldo test with flying colors. Overall this was beautiful day on wonderful trails supported by some of my best friends… oh, and one more piece of good news: I didn’t get lost. 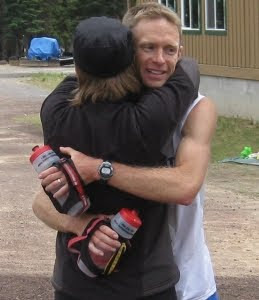