Say you have a 50K race on a Saturday and a 40 mile race the following week on a Sunday. When you put them on your calendar it sort of appears as though you have a weekend rest in between. I know it sounds strange, but what appears to be a rest weekend is actually the Sunday of the 50K weekend and the Saturday of the 40 mile weekend. Oops. Anyway, I didn’t feel like the April 2 Shotgun 50K set me back too much so I was feeling ready to take on the Peterson Ridge Rumble on April 10.

The Rumble promised to be much more competitive with the defending champion (also new dad and my most favorite positive-energy runner) Yassine Diboun along with several other fast folks. The Rumble is normally about 60K but race director Sean Meissner opted to move it up to an even 40 miles this year. I ran the Rumble a few years ago and it’s a fairly fast course with about 2000 feet of climbing total and nice forgiving mixture of trails and gravel roads. The drier landscape east of the Cascades was also a welcome change from the rain and mud of Eugene.

From the gun, Yassine took off, hitting a 6:15 pace… way too fast for my liking! I settled into a chase pack of four other guys. I led the charge up the first single track until I missed a strange detour that took us off the trail and up and over a short rock outcropping. I fell back behind the group as we resumed our pursuit of Yassine. Eventually, I could feel the group start to move into a true ultra pace which was nice, but I was not quite ready to let Yassine say out of our sights for too much longer. I pulled back up to lead the group and sped up to just below our comfort level. Soon enough, we could see Yassine and I knew we would get a little rest once we re-joined him. Jace Ives went with me and Nick Triolo was not far back. Once Jace and I joined Yassine we settled a bit as we chatted and started passing the 20 mile runners.

I was experimenting with Hammer gel in a flask, completely annoying at first as it bounced around in my shorts pocket. Eventually I got used to it and overall it worked fairly well, except I needed to do a better job of tracking how much I was getting in my mouth. Hammer gel is a little thick so I don’t think each squeeze I took was not quite a “serving” size. I was also experimenting with Gu2O which is the drink they will have at Western States. Using the 3 scoops per bottle recommended was way too sweet and my stomach would have protested. I topped the drink off with water a few times. I started taking S!Caps about 30-40 into the run and took them about every 30-40 minutes after that. It was a cool day and I wasn’t sweating a great deal. Overall my hydration, electrolytes, and fluid were good the whole day. I feel like I’m getting much better as this part of the race, which I think has been my biggest weakness. (My wife is very glad to hear this.)

On the way back down the first loop, Yassine and Jace started to crank it up again and we rolled down to the flat gravel road near the start at a good clip. Once we hit the gravel road Yassine upped the pace again and I started to fall off a bit. Jace worked to keep up but as we turned up for the second loop he to started to fall off. Yassine was making a decisive move and continued to press the pace all the way up to the top of the second loop. Soon I started to lose sight of him even though we were on fairly open roads. Jace started to have stomach issues about half way up and as I passed him, I thought I heard some burbling sounds. Uh, oh. At the top of the long climb there was an aid station around mile 30. I topped off my bottle grabbed a few gels and as I left one of the volunteers encouraged me: “He’s about a minute up on you… It’s a RACE!”

When you are watching the leader pull away and you’re working really hard, you start to reassess your game plan. I hadn’t given up, but hearing the aid station worker’s words really helped. One minute isn’t very much over 10 miles and I was still feeling strong and I knew that Yassine’s last surge might have cost him something. So, I went, and eventually with what I thought was 3 or 4 miles to go I caught him. He said he was having some cramping. I offered some S! Caps but he said he had just taken two.

I kept the pace quick and 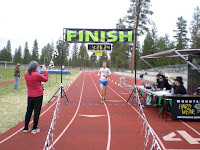 was feeling good. I didn’t know how much further we had exactly but I felt I could keep the heat up for at least another 30 minutes. The finish came faster than either of us expected and soon I was rounding the track. Feeling the rush of winning, I decided to take the hurdle at the end, which seemed like a good idea until I was halfway over. Luckily, I 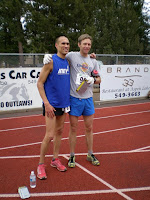 What an awesome day! The Rumble was just that. Only a few times did I feel like I was just out doing a 40 mile run. Most of the time I was really racing. Thank you to Yassine, Jace and Nick for pushing us all, and helping me celebrate my birthday week-end.
Posted by Dan Olmstead at 8:36 PM